This crab ceviche recipe is a twist on the classic Latin recipe. This version is both tasty and easy to prepare, as it needs just six ingredients and 15 minutes.

Sometimes all you need is a light meal to satisfy your hunger. Whether you opt for something like avocado toast, tostones with salami, there’s nothing both as filling and juicy as a ceviche, as well as healthy. That is why I want to show you how to make this easy crab ceviche recipe that can be enjoyed alongside some corn tortillas or white rice.

All it takes is six ingredients and 15 minutes of your time!

Ceviche is a popular Latin American dish originally from Peru. It is made with raw fish macerated in fresh citrus juices, such as lime or lemon. It is also commonly spiced with seasonings like ají, chili peppers, red peppers, salt, and cilantro.

Why You’ll Love This Recipe

Loaded with flavor and texture, ceviche is a very refreshing and light meal. Regardless of how you eat it, it can be enjoyed as an appetizer or a main meal. Made with various vegetables, this dish is not only delicious but also has so many health benefits as it is very low in cholesterol. It is also full of vitamin C from all the citrus juices.

Marinate the crab meat. Place the crabmeat in a medium glass bowl. Glass bowls are best to use when working with citrus, as opposed to plastic. Squeeze in lime juice and let the crabmeat marinate for about 5 minutes.

Combine the ingredients. Stir in the onion, tomato, jalapeño, cilantro, salt, and pepper. Make sure all the ingredients are coated with the lime juice. Refrigerate for about 10-15 minutes before serving. Since we are using canned crab meat, there’s no need to marinate it for too long.

This crab ceviche can be served as an appetizer or a main meal. I like to eat it alongside some tortilla chips, plantain chips, or tostadas but you can also enjoy it with a plate of white rice and avocados.

While ceviche is best consumed immediately, it can still be enjoyed at a later time if that is not an option or if you have leftovers. In that case, the best way to store this crab ceviche is by first pouring out the marinade from the solid remnants to avoid oversoaking. Then, place the leftovers in an airtight container in the fridge for up to 48 hours, but no later than that. You can squeeze a little more citrus juice the next day to freshen the flavor.

How long does Ceviche last?

Ceviche, after preparation, is best consumed within two hours. However, it can last in the refrigerator for up to two days.

How to tell if Ceviche has gone bad?

Ceviche, like any other seafood, tends to go bad quite quickly. It is best to refrigerate for up to 48 hours and no later. The best way to tell if ceviche has gone bad is by smelling it, checking the edges to see if it has deformed, or feeling if it has gone slimy. If any of these are detected, it is best to dispose of the ceviche right away as it could lead to seafood poisoning.

What’s the Difference Between Jaiba and Cangrejo?

Jaiba and cangrejo, two different types of crab meats, are different based on their origin. Jaiba crab lives in freshwater, while cangrejo are found in saltwater. The body structure of jaibas is also different from the cangrejos in that they have smaller legs and slightly bigger bodies. Whereas, cangrejos have bigger legs as compared to the shell.

How long does ceviche need to marinate for?

Ceviche is marinated or soaked for several hours in order to “cook” the raw seafood. However, how long you marinate is based on preference. Some prefer the barest cooked outer layer with a raw interior.

Just like when cooking red meat, you have your rare, medium rare, and well-done options. If you like your ceviche rare, you can soak for 30 minutes, for medium rare, soak for two hours, and for well done, soak for 4 hours.

What is traditional ceviche made of?

Ecuadorian ceviche is traditionally made with shrimp that is marinated in a tomato-based sauce along with lime juice, bitter orange, and salt, and served with toasted corn kernels.

Mexican ceviche is traditionally made from fish such as mahi-mahi, tilapia, sea bass, red snapper, scallops, and shrimp that is marinated in lime juice, along with tomatoes, onions, cilantro, tomatillos, avocados, olives, and cucumbers, and served with tortilla chips.

While ceviche doesn’t involve cooking fish over heat, it is not cooked but it’s not necessarily raw either. The citric acids in a ceviche actually act as agents of a chemical process known as denaturation where it changes the proteins in the fish. The flesh then becomes opaque and firm, as if it has been cooked over heat. 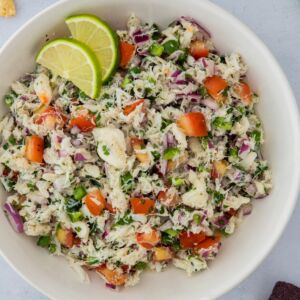 KeywordCrab ceviche, how to make crab ceviche
Tried this recipe?Tag @my.dominican.kitchen on Instagram 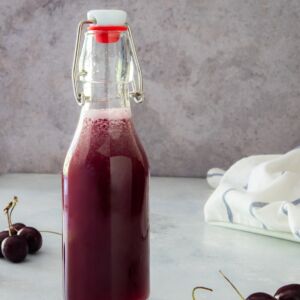 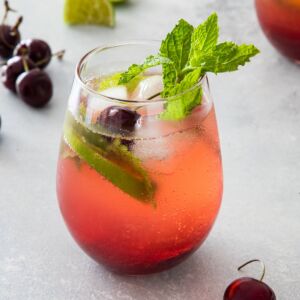 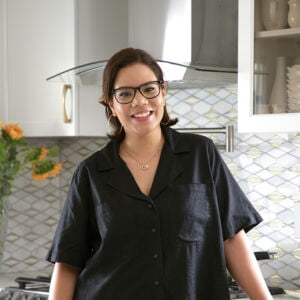 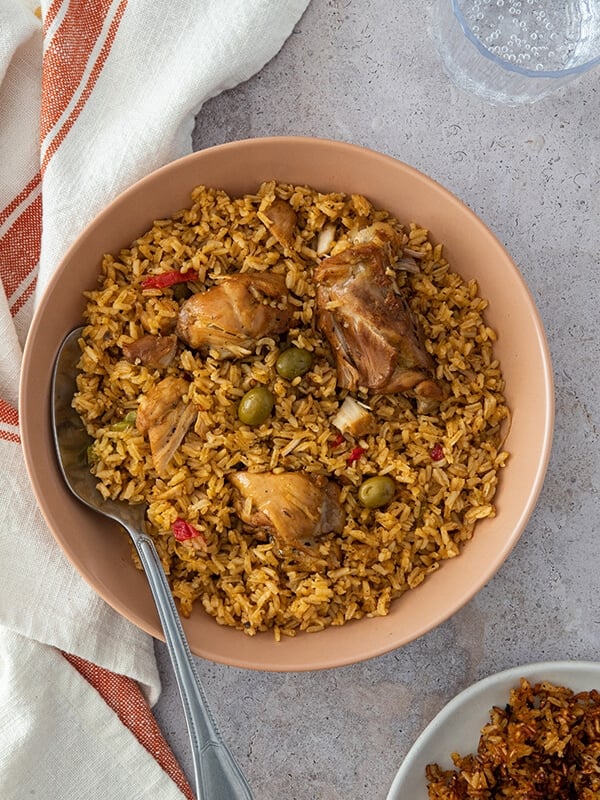 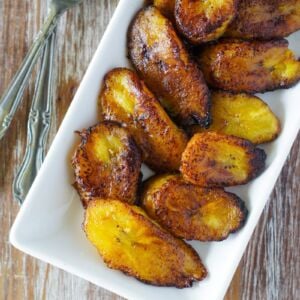 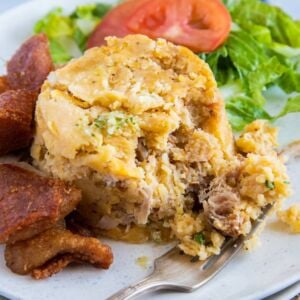 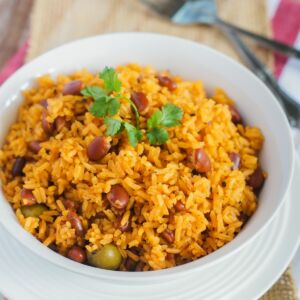 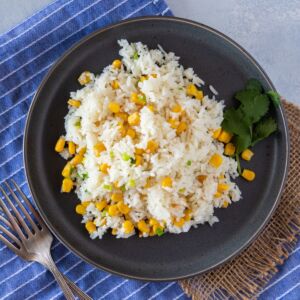 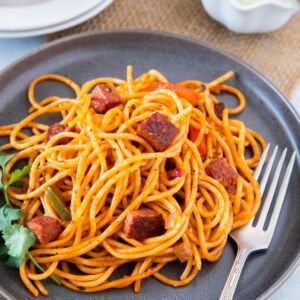 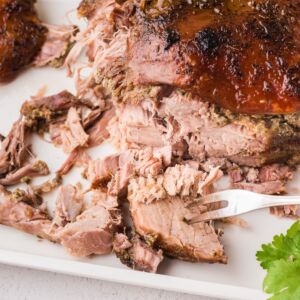 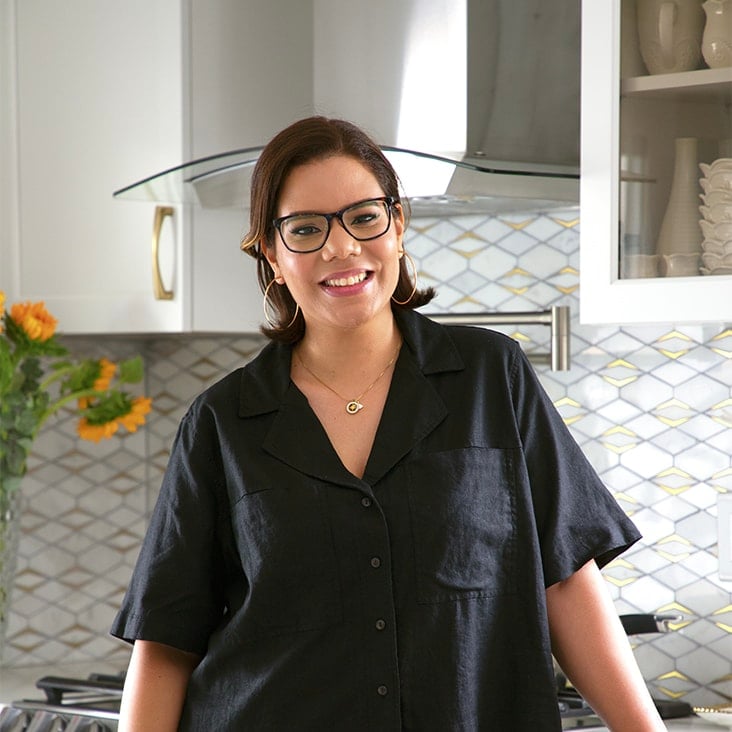